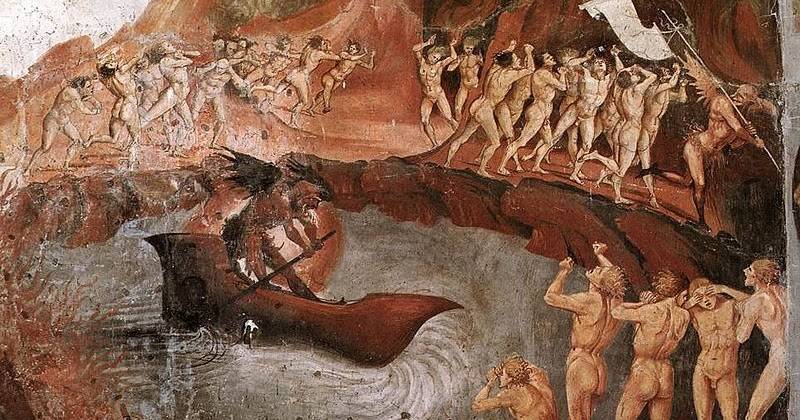 The Canto III of Hell shows us a harsh way of how we should not face life.

These damned are those who, during their lives, have never acted either for good or for evil, without ever daring to have an idea of their own, but limiting themselves always to that of the strongest. Among them are also the Angels who did not take sides in the battle that Lucifer lost against God.

Dante inserts them here because he judges them unworthy of deserving both the joys of Paradise and the pains of Hell, because of their not having taken sides neither in favor of good nor in favor of evil. They are forced to walk around naked for eternity chasing a sign – which runs very fast and turns on itself – stung and injured by wasps and flies. Their blood, mixed with their tears, is sucked by annoying worms.

Dante defines these souls as those of sinners “who were never alive.” The poet’s contempt for this category of sinners is maximum and complete. According to the theological point of view, the choice between Good and Evil must be made. From the social point of view, moreover, in the Middle Ages, the political alignment and active life within the Municipality were almost always considered fundamental and inevitable stages in the life of a citizen. According to Dante’s reflection, if the man is a social being, whoever shirks his duties towards society is not worthy of any consideration.

Dante also quotes mysteriously, among the ranks of the Ignatians, the soul of a character who, in life, “made for cowardice the great refusal.” Most scholars of his contemporaries identify this personage with Pope Celestine V (Pietro da Morrone), a hermit who reached the Papal throne in 1294 but considering himself incapable of holding the office of pope, and he renounced his office thus allowing the rise to power of Boniface VIII, a pontiff whom Dante firmly despised. Already from the following century, this interpretation had less consideration among critics. Since then, the identity of the soul of the one who made “the great refusal” has generated a not indifferent problem of interpretation.