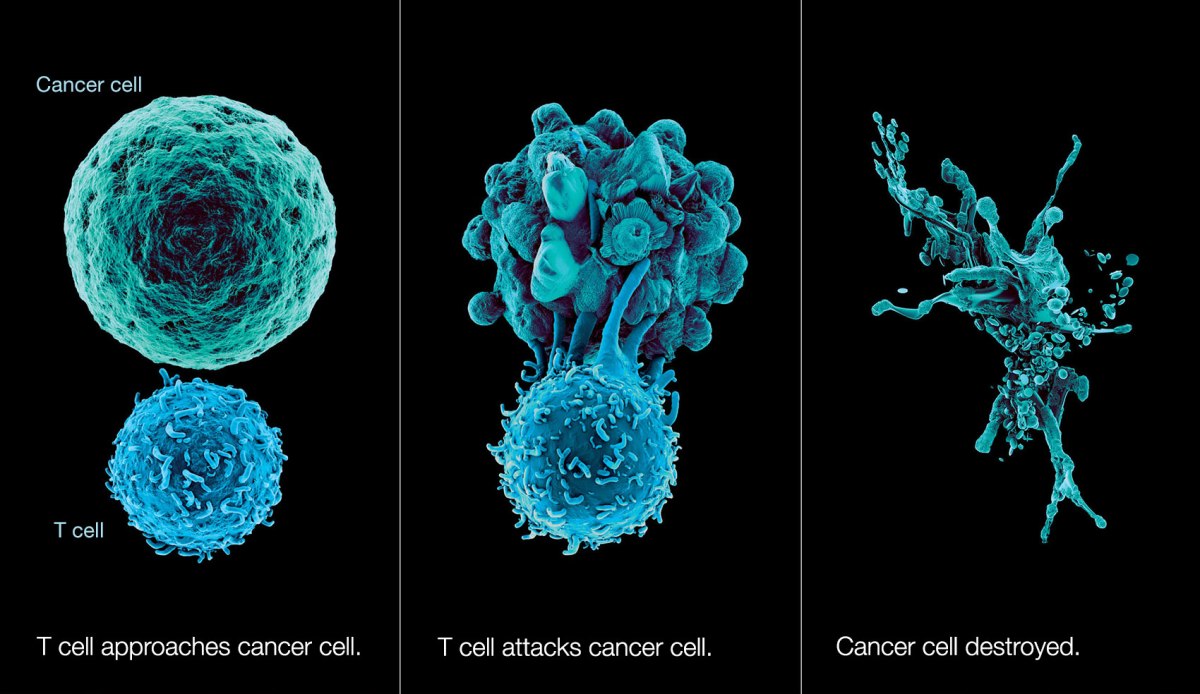 What are the types of immunotherapy?

Drugs called checkpoint inhibitors are the most widely used form of immunotherapy for cancer. They block a mechanism that cancer cells use to shut down the immune system. This frees killer T-cells — a critically important part of the immune system — to attack the tumor. Four checkpoint inhibitors have been approved by the Food and Drug Administration and are on the market. They are given intravenously.

Another form of immunotherapy, called cell therapy, involves removing immune cells from the patient, altering them genetically to help them fight cancer, then multiplying them in the laboratory and dripping them, like a transfusion, back into the patient. This type of treatment is manufactured individually for each patient and is still experimental.

Bispecific antibodies are an alternative to cell therapy, one that does not require individualizing treatment for each patient. These antibodies are proteins that can attach to both a cancer cell and a T-cell. That way, bringing them close together so the T-cell can attack cancer. One such drug, called Blincyto, has been approved to treat a rare type of leukemia.

Vaccines, another form of immunotherapy, have had considerably less success than the others. Unlike childhood vaccines aimed at preventing diseases like measles and mumps, cancer vaccines are aimed at treating the disease once the person has it. The idea is to prompt the immune system to attack cancer by presenting it with some piece of cancer.

The only vaccine approved specifically to treat cancer in the United States is Provenge for prostate cancer. Another vaccine, BCG developed to prevent tuberculosis, has long been used to treat bladder cancer. As a weakened TB bacterium, BCG appears to provoke a general immune system reaction that then works against cancer. Researchers hope that other vaccines may yet be made to work by combining them with checkpoint inhibitors.

Which types of cancer are treated with immunotherapy?

Checkpoint inhibitors have been approved to treat advanced melanoma, Hodgkin’s lymphoma, and cancers of the lung, kidney, bladder, and head and neck. The drugs are being tested in many other types of cancer.

So far, cell therapy has been used mostly for blood cancers like leukemia and lymphoma.

Which cancer drugs are checkpoint inhibitors?

The four on the market are Yervoy (ipilimumab) and Opdivo (nivolumab), made by Bristol-Myers Squibb; Keytruda (pembrolizumab), by Merck; and Tecentriq (atezolizumab), by Genentech.

How well does immunotherapy work?

Though immunotherapy has been stunningly successful in some cases, it still works in only a minority of patients. Generally, 20 percent to 40 percent of patients are helped by checkpoint inhibitors — although the rate can be higher among those with melanoma. Some patients with advanced disease have had remissions that have lasted for years. In some cases, combining two checkpoint inhibitors increases the effectiveness. But for some people, the drugs do not work at all, or they help just temporarily.

Cell therapy can produce complete remissions in 25 percent to 90 percent of patients with lymphoma or leukemia, depending on the type of cancer. In some cases, the remissions can last for years, but in others, relapses occur within a year.

Cogito Ergo Sum I am a young man with plenty of determination and motivation. After high school in my village, I decided to move to the university of law in Sassari. After two years, I realized that it was not for me, and I went to London to improve my English and make a new job and life experience. It was great working in the best hotels and restaurants in Central London (Mayfair and Knightsbridge ). I started reading a lot making myself curious about the World and the People. Journalism, soon became my passion for sharing my idea and knowledge to the most famous and richest customers in London. I come back to Italy to spread my knowledge to my family and friends. For the next future, I see my self successful Blogging and in Hospitality with the passion of theatre. I hope to meet all of you, signing an autograph and shaking hands-off in a sign of respect. All the best of luck Yours, Fabio Leggi tutti gli articoli di Fabio Iacobini